Designer and developer of software. Believes the pursuit of beauty yields simplicity. Creator and consumer of open source software. Good at naps! 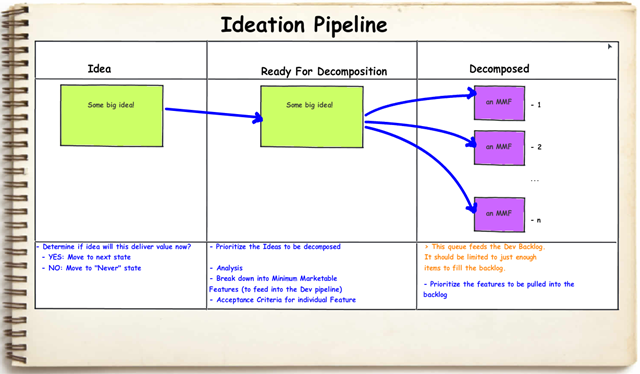 This is an initial sketch of an Ideation Pipeline my team will be using to help drive the direction of a product we’re working on. The sketch is based on a discussion we had about how we currently get from an idea to delivering on that idea, and how we’d like to do that going forward.

While we probably should have done a full on Value Stream Map, we didn’t. And the only excuse I have is that we’re kicking this product off so there isn’t really a set way we do things… not yet anyhow.

At any rate, later today I’ll be turning this loose sketch into a physical Kanban board that we’ll used to track and pull ideas through our ideation process, and feed the resulting features into our development process.

But first, I want to explain how the whole thing will work, or at least how we’re going to start – I’m sure we’ll tweak some things, and change out whole parts of this process as we go along. Let’s get started.

Starting with an Idea

Our process starts with an idea. An idea can be nearly anything that someone thinks will add value to the system. An idea might be laser-focused, or it might be more nebulous. At this stage we don’t really care, it’s only important that we realize we have a potential value-adding idea and that we act upon it.

The Standardized Work (designated by the blue text in the lower box of each stage) in this stage is pretty basic, though not necessarily easy. In essence, an idea needs to be evaluated to determine if it will deliver value.

And what does deliver value mean?

Seen though the eyes of those who pay for, use, and derive value from the systems we create.

There are many factors that go into determining if something is or is not valuable. In our case it’s things like market demand, product vision, and roadmap, feature parity with competitors, availability of resources, effort, etc… Also, value is a temporal thing. So while an idea might not hold much promise for delivering value now, that doesn’t mean that it won’t at some point in the future.

If it’s determined that an idea will deliver value now, the idea card is moved into the Ready for Decomposition state. However, if the idea won’t deliver value now (or at least within the very short, foreseeable future), it’s moved to a Never state. In the physical world that means the Idea Kanban is taken off the board.

But wait… if the idea has potential to provide value in the future, and you’ve moved it to Never, won’t we lose track of it?

YES, exactly! And you know what? We don’t care! If the idea truly has potential for some future value, it will come back into our pipeline on its own. Why waste time, effort, and money keeping track of a huge backlog of stuff that might not ever happen? DMZ that stuff.

However, if we find this queue to be a bottleneck, or a source of thrashing, we’ll likely put a limit on it.

The first thing that needs to happen when any idea enters the Ready for Decomposition state is to re-prioritize the queue. This needs to happen so the team knows which ideas are most important and should be decomposed first.

Decomposing an idea means doing necessary analysis activities to understand and flesh-out the idea, break it down into one or more Minimum Marketable Feature (MMF), and defining acceptance criteria (in a loose Context/Specification style) for each feature. During the decomposition the MMFs are transitioned to physical Kanbans that will feed into and flow through our development pipeline. These are also known as Feature Cards within our organization.

Idea decomposition is not a regularly scheduled activity, but is triggered by a downstream need for Feature Cards. That is, ideas are pulled through the Ideation Pipeline by some downstream activity that will move the idea closer to providing value. We’re pulling from Concept to Cash.

It should also be noted that we only decompose as many ideas as are needed to satisfy the source of the pull. In this case, that would be our development pipeline’s backlog queue. If the backlog has two spots open, and we decompose an idea into two MMFs, then we’re done decomposing for now. If we only decompose it into one MMF, then we’ll need to decompose another idea.

And what if that second idea decomposes into two or more MMFs? Now we’ve got more MMFs than we can fit in our backlog… oh no!

Actually, that’s just fine. Our development backlog is itself a prioritized queue. So we just need to prioritize all of the MMFs, fill the backlog with the most important ones, and let the rest sit in the Decomposed state until the backlog pulls another one in.

On to the development pipeline.

Well… that’s what those MMF Kanbans would do anyhow. But you, dear reader, will have to wait until later – like until I write a post that covers our development pipeline.

If you’re looking for more information on some of the terms or concepts I’ve mentioned here, be sure to check out Karl Scotland’s excellent round-up of links/references to materials on Kanban Software Development.